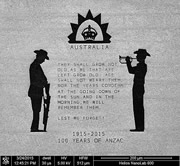 A tiny tribute for the ANZAC Day centenary.

Quick links to the following:

ANFF has signed an international agreement.

Current and previous ACT/WA Node newsletters are available as PDF files below. If you would like to be added to our newsletter distribution list click here.

ANFFL has announced a Staff Travel Fund that will help to pay for interstate travel of ANFF node’s staff to other ANFF facilities.

Grants are available for up to AU$2,000 and cover interstate airfares, food and accommodation.

The fund is designed to help increase staff awareness of the capabilities available across the ANFF network, to build closer linkages between nodes, and increase opportunities for collaboration.

The fund provides reimbursement to nodes for staff to travel to undertake activities intended to enhance the capabilities of the applicant’s home node, the node being visited, or the wider ANFF network.

Successful applicants will be required to present a talk on their home node at the node they are visiting, and also to report back on their trip with a talk once they arrive back home.

Applicants must hold a position at least partly funded by the ANFF and must hold that position when the travel occurs.

Guide to including ANFF access costs in ARC and NHRMC grants for funding in 2016.

This useful guide, prepared by the ANFFL, is designed to assist researchers applying for ARC or NHRMC grants where their research needs access to tools and facilities of the ANFF. If you are going through this process it may save you some time and increase your chances of success! Click here.

Have a look at this interactive periodic table of the elements from Merck KGaA. It offers a lot of interesting information. Click here to go to the website - available in English, French, Spanish and Dutch languages.

Article on making your poster presentation stand out from the rest!

This article was originally published in the journal Nature. Posters are a chance to show off work and to network with colleagues, but only if the design is easy on the eye. Published online 29 February 2012 - click here

We also value your feedback. Please use our on-line feedback form and we use this information to improve our services to you.